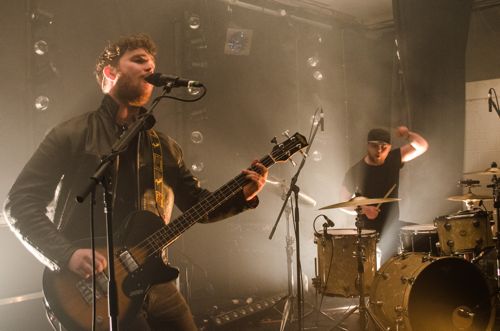 A long time ago, DPA microphones had a strong reputation of being the premier choice for recording jazz and classical music.
But in recent years, with constant improving PA speaker systems with increased resolution and definition, bands focusing on live touring instead of recording, a lot of rock and pop acts have been taking a second look at their microphone choice.
Along came DPA...


DPA Microphones gets a ‘Royal‘ Seal of Approval
Rock duo Royal Blood are touring Europe with a selection of DPA Microphones that were chosen because they deliver such a natural sound.
Mercury Prize nominees Royal Blood, one of the breakthrough bands of the year, have been using a range of DPA microphones on their recent UK tour.

"We use DPA‘s d:facto™ Vocal Microphone on vocals and d:vote™ 4099 Instrument Microphones on snare bottoms and toms," says Front of House engineer Phil Jones from Output Audio. "I was never a fan of snare bottom and now literally can‘t imagine not using one."


Amptec and DPA hosted a live microphone workshop with Girls In Hawaii
Belgium indie rock band Girls In Hawaii recently gave a small group of audio engineers the opportunity to attend their sound check at Schouwburg Kortrijk, where they performed later that evening. This concert was part of their acoustic Hello Strange Tour.
This unique workshop, organized by DPA’s Belgium distributor Amptec, was supported by Girls In Hawaii’s FOH engineer Tommy Desmedt who took part in a question and answer session with the invited audience, during which he discussed microphone and mixing techniques.
Brecht Ieven, DPA product specialist at Amptec, says: “After a general introduction to DPA’s microphone technology, the audience was able to listen to the sound check of the band and hear solo examples of the various DPA microphones used on stage. These included one d:screetTM 4061 Miniature Microphone inside the bass drum, three d:dicateTM 2011C Recording Microphones, used on hihat and overheads, ten d:voteTM 4099 Instrument Microphones, used on various instruments like snare, toms, harmonium, philicorda and vibraphone, and five d:factoTM Vocal Microphones (of which two were used with a Sony DWZ Wireless System).”
“Even though we have to deal with more than 40 input channels, the DPA mics make the job a lot easier,” says Tommy Desmedt. “They can be easily and discreetly mounted on the various instruments used on stage, and simply sound great. You get a very natural and consistent sound, with great feedback rejection.”
Not only the mixing engineers were very enthusiastic about the results with the DPA Microphones, also the musicians expressed their satisfaction. “These are the best vocal microphones we have ever used,” Antoine Wielemans (singer & guitarist) says.


The Sore Losers and DPA, Live at the Ancienne Belgique
Belgian rockband The Sore Losers finished a very busy 2014 with a furious show in a packed Ancienne Belgique.
DPA microphones used were:
3x d:facto on vocals (lead, bass and guest vocals)
2x d:vote 4099 on tom and floortom
4x 2011 on snare drum (top side), hihat and overheads
1x 4015A as a drum ‘kit’ microphone
1x 4018VA on bass amplifier (combination of the d:facto MMC4018V capsule, and MMP-A preamp)


Metallica’s Lars Ulrich drum kit captured with DPA 16 d:votes
After 15 years of using another brand, Metallica switched to DPA d:vote 4099. A total of 16 d:vote mics are used on toms and cymbals.


for more info and pricing.