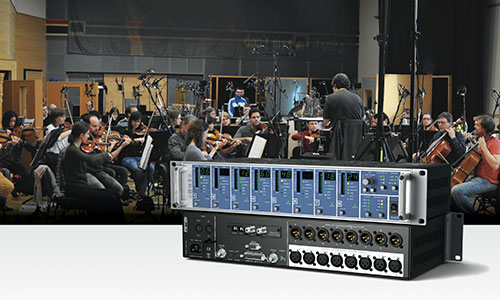 Released to coincide with the First World War centenary events across Europe throughout 2014, the musical 14—18 is currently running at the gigantic Nekkerhal venue in Mechelen.

Both the music tracks for the musical and the content for the 14—18 CD were recorded, mixed and mastered at Galaxy Studios in Mol.

The size of the production, and the large numbers of musicians and singers involved, meant Galaxy needed to use four of its recording studios in combination with two control rooms. Galaxy’s main film scoring engineer, Tonmeister Patrick Lemmens, and Studio 100’s producer Jan Bernolet and music supervisor Kristof Aerts were assigned the project.

“What initially started as a standard assignment — recording a music score, which is our business
— steadily developed to a major venture,” comments Tom Van Achte, studio manager at Galaxy Studios. “We recorded the whole score in three days, requiring a lot of technical and logistical preparation. The 14—18 score represented quite a challenge.”

For the recording, the 70-piece Royal Flemish Philharmonic orchestra, conducted by composer Dirk Brossé (pictured above), played in Galaxy’s main studio while the choir and soloists (pictured below) sang their lines in Studio One and the vocal booths, respectively. “Initially to make the musicians and singers ‘feel’ the score, but also because we were recording the vocals for the CD,” explains Van Achte.

All the audio content was recorded simultaneously with both analogue and digital microphones.
Because of the specific character of the recordings, two separate control rooms were used: the analogue API room, engineered by Gregor Zielinsky — the API desk was only used for monitoring, as the recording went straight from the digital mics (AES42 standard) to several AES42/MADI converters (o.a. eight RME DMC 842 M) into Pro Tools — and the NEVE 88 D control room, the heart of Galaxy’s recording landscape, for the 14—18 production team. A video-link system established visual contact between the control rooms, the orchestra in the Galaxy Hall, the choir in Studio One and the soloists in the vocal booths.