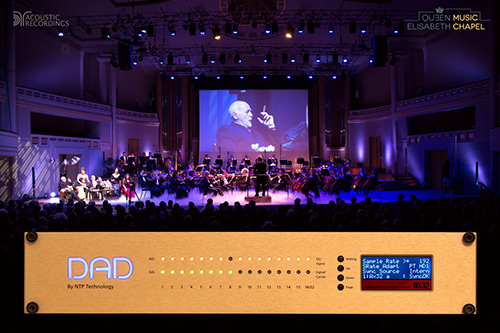 AX32 converters captured the detailed audio nuances during a large-scale recording of a recent concert with José van Dam & YOU in Brussels. The recording was made at the city’s largest cultural venue, the Palais des Beaux-Arts, for the Queen Elisabeth Music Chapel. Other performers included the National Orchestra of Belgium and soloists. The concert was streamed directly over the web using low-latency uncompressed audio-over-Ethernet networking.

Composer, musician and sound engineer Jarek Frankowski was responsible for the recording and the sound design: “We were able to take this feed straight from an Audinate Dante card in the AX32. The event worked so well that Pierre-Josef from the main Belgian classical radio channel, Music 3, asked me to be an adviser for their future Dante set-up.
“I decided to invest in two DAD AX32 audio analog/digital/analog converters for my Brussels-based company, Acoustic Recordings, because of their very high sound quality and versatile connectivity. Each converter allows up to 48 microphones to be routed as IP data along 100 metres of Cat 6 cable or a practically unlimited distance via optical fibre.
“Following this event I prepared the AX32 and Adobe Pro Tools setup for the live recording of Tunisian composer and performer Anouar Brahem who fuses Arab classical music, folk music and jazz. This was produced at the Flagey concert hall which is the home of the Brussels Philharmonic. Once again, the full brilliance of the performance was captured by the AX32 and retained right through post-production to the final master file. The main engineer was very happy to run my AX32 and I heard him seriously speaking about getting one of his own.
“In a completely different style, we produced a video of Andy Warhol’s Night with the Musique Nouvelles Ensemble. I did the recording and mix with AX32.
“Buying AX32 converters for my recording and live sound system is my best investment ever. After 20 years of using the finest preamps and converters, I find the AX32 is an audio dream. Two AX32 are heaven!”

Born in Poland, Jarek Frankowski performs regularly as a guitarist and chamber musician. He has worked with numerous classical music ensembles and artists for a wide range of record labels as well as working on film soundtracks. As a composer, he has created instrumental music for several albums and film sound tracks.
Designed for use in no-compromise audio recording and mixing as well as post-production, the DAD AX32 adds even higher sound quality than the established AX24 which is currently the worldwide reference standard. The AX32 can be configured with up to 48 analogue audio channels, making it an extremely compact multi-channel converter. The optional microphone preamplifier provides up to 72 decibels of analogue gain, 123 dB dynamic range and an equivalent noise floor of -133 dB. The AX32 comes as standard with Avid Pro Tools and eight AES/EBU and MADI inputs and outputs. It can optionally be fitted with a Dante IP audio interface and two optical MADI interfaces, making it an extremely versatile platform.
A versatile interface structure allows the analogue-to-digital, digital-to-digital and digital-to-analogue converters to be assigned to any digital interface, as well as patching between the interfaces on a channel-to-channel basis.
The AX32 can be fully remote controlled via Ethernet using NTP Technology’s DADman software. Alternatively, the preamps can be controlled from Pro Tools software and basic control is also possible from the front panel.