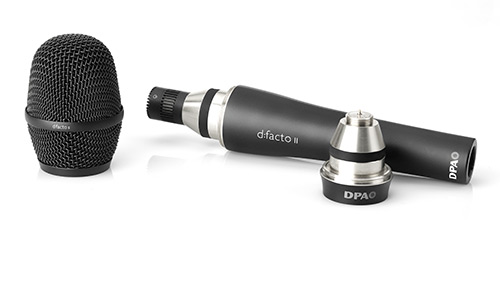 DPA Microphones introduced the d:facto™ II Vocal Microphone at the 2013 NAMM Show. With a true studio sound for the live stage, this latest addition to the d:facto line offers an extraordinarily natural sound, high separation and extreme SPL handling, giving users unlimited possibilities for their performances. In addition to use with the new wired DPA handle, the d:facto II provides singers and engineers with the added benefit of a state-of-the-art adapter system that allows for seamless integration with many professional wireless systems.

The new d:facto II guarantees users exceptional DPA sound with popular existing wireless systems such as Sony, Lectrosonics, Shure, Wisycom and Sennheiser. The d:facto II provides improved audio performance as it is superbly linear in frequency and phase, both on- and off-axis, while its impressive definition and accuracy reproduces a singer’s voice effortlessly.

Equally at home in sound reinforcement and recording applications, the d:facto II is sure to be an instant favorite of live sound engineers. Its simple plug-and-play features allow it to reproduce an extraordinary natural sound, which reaches the extreme sound level handling of 160 dB. As with all DPA mics, the d:facto II provides superior gain before feedback, and a robust three-stage pop protection grid built into the microphone to remove unwanted noise. It also boasts exceptional isolation from handling noise as well as the ability to accommodate extreme sound levels.